In the Israeli market, growth rates in the first half of the year amounted to a cumulative decline of 9.7% in GDP. Once Israel's rapid population growth in comparison to other OECD countries is neutralized, Israel's position is close to the median. As to the activity in the 3rd quarter, a CBS survey indicates improvement in economic activity in August as far as business turnover compared with July. However, data concerning credit card usage in July indicates a slight decrease compared with June. Therefore, additional data is required in order to evaluate the market activity in the 3rd quarter, although it appears to reflect a recovery compared with the 2nd quarter.

August inflation index remains unchanged but is expected to increase by 0.2%. The negative inflation environment has deepened – annual inflation and core inflation have dropped in August by 0.8% and 0.5% respectively.

Similarly to other economies in the western world, the COVID-19 crisis hit the Israeli economy severely. Yet, the major economic indicators are still stable – the debt-to-product ratio is still relatively low, currency rate is also stable and unemployment rates rose only moderately. Apart for specific industries, such as tourism, events, and culture, the growth engines of the economy remain operative even in these hard times. The Israeli government provides support program on a large scale for businesses and households, and also keep substantial foreign currency reserves (130B US$).

Business confidence index (BCI): 100.2 This business confidence indicator provides information on future developments, based upon opinion surveys on developments in production, orders and stocks of finished goods in the industry sector. It can be used to monitor output growth and to anticipate turning points in economic activity. Numbers above 100 suggest an increased confidence in near future business performance, and numbers below 100 indicate pessimism towards future performance.

In August, the Israeli passenger car market registered an increase of 4.97% compared with August 2019, with 20,241 new registrations. From January 2020, the market dropped 19.1% - 162,080 units in 2020 compared with 200,354 last year. The recovery in August can be associated with the relative relief in the closure, that enabled the opening of show-rooms and allowed people to move more freely. 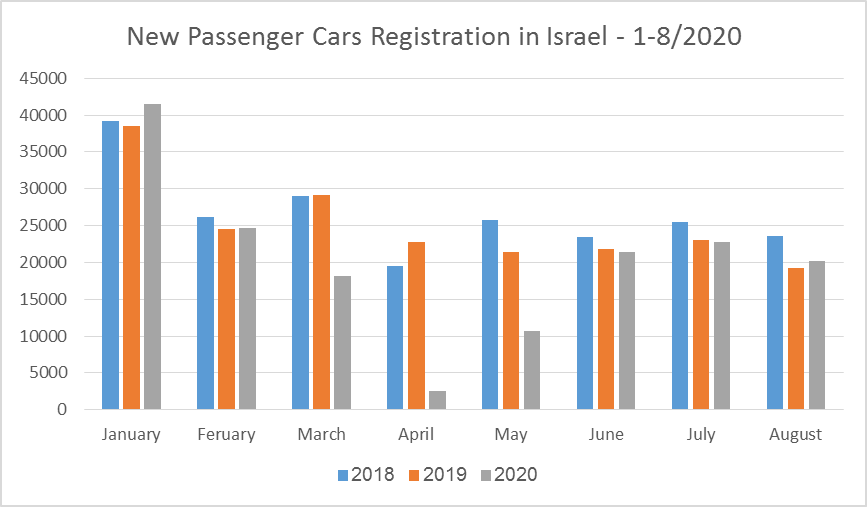 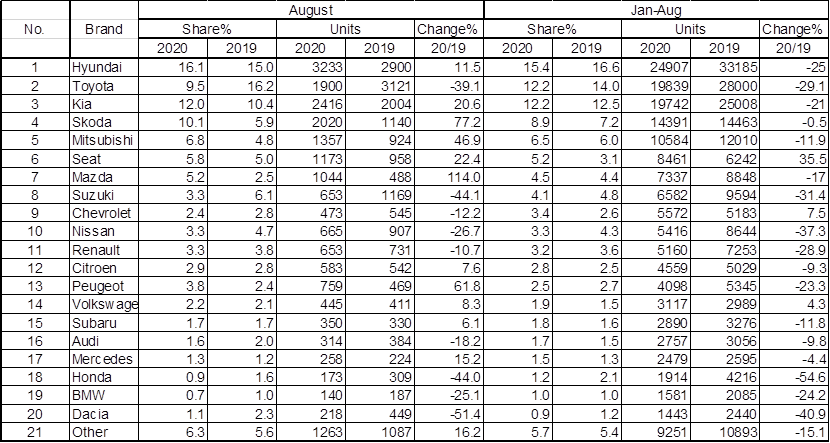 New CV above 3.5 ton Registration  According to Brands 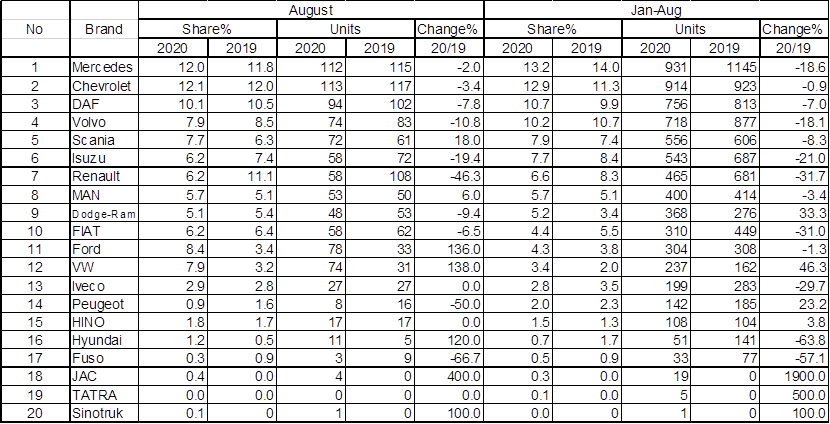 New Bus Registration in Israel 1-9/2020 According to Brands

The Israel Vehicle Importers Association (IVIA) was accepted for the first time as member of the OICA, despite the fact that there are no auto manufacturing plants in Israel. The main reason for the acceptance is the strength and importance of the Israeli Auto-Tech industry, which generated companies such as Mobileye and Waze, in addition to numerous Auto-Tech companies and start-ups. Mr. Hezi Shayb, CEO of the IVIA, said following the historic achievement: "We will serve as a bridge between tech companies and auto manufacturers around the world. The IVIA will help connecting Israeli Tech companies developing Cyber, Connectivity, Electrification and Autonomous vehicle solutions, with the global Auto industry".

Israeli Auto-Tech company Tactile Mobility announced that it had signed an agreement with BMW to supply software and sensors to all vehicles manufactured by BMW, including Mini and Rols-Royce, starting from 2021. Tactile Mobility's technology gathers road and driving data by using sensors, and processes the information in order to improve efficiency and safety. According to the statement, starting from summer 2021. Every BMW vehicle coming off the production line will be fitted with Tactile's system.

A new App will help public transportation users comply with ministry of health COVID-19 restrictions regarding congestion in buses. With a newly added feature, Users of HopOn App, both passengers and bus drivers, will are able to rate the number of passengers on the bus. The app will display the congestion level in different bus lines, so passengers can see if the level is according to ministry of health restrictions, and consequently if they can use the line safely. Passengers will also be able to see whether the bus is going to skip their stop, and at the same time drivers will be able to report in case of high congestion levels, so that the operator can dispatch additional buses.

The minister for environmental protection Gila Gamliel and Tel-Aviv mayor Ron Huldai have agreed on promoting a joint plan designed to transform Tel-Aviv into a Low Emission Zone (LEZ). According to the plan, starting from Stage 1, polluting vehicles (diesel powered below EURO IV) will be banned from entering the city, unless they install an additional filter which will be subsidized by the government. In later stages, certain areas will be designated as Ultra Emissions Zones, and will not allow entrance of vehicles with less than EURO VI pollution standard. In addition, the plan will include the electrification of all Tel-Aviv city buses.

The Israeli Ministry of Transportation issued a memorandum as part of regulating autonomous vehicle testing and piloting in Israel. According to the memorandum, vehicles participating in testing will be divided into 4 groups, corresponding to their autonomy level. The highest level defines a fully autonomous vehicle, corresponding to level 5 vehicle autonomy – this is the first time that legislation in Israel deals with such a vehicle. The memorandum also specifies the pre-requisites to conducting such a test: specification of the vehicles' communication capabilities, means of contacting emergency services, compliance with the national Cyber center to prevent hacking, contact with enforcement authorities and specific definition of the area in which the test/pilot is carried out. Vehicles partaking in tests will need appropriate insurance coverage. The ministry of transportation also refers to the possibility of a "severe safety incident", in which case the test will be discontinued.

The Israeli taxes authority is changing the "Green tax" formula" that determines tax benefits for low emission cars. The formula calculates 5 polluting emissions and gives each model a "Green score" – tax benefits are determined according to this score. The updated formula will cause price increase of 1,000-2,500 NIS for most popular car models, and also an increase for popular hybrid cars sold in Israel.

Mahindra mulling the use of REE electric car platform

Following FCA and Toyota, India's second largest automotive manufacturer is considering the use of Israeli company REE's platform for building electric LCVs. Mahindra published a memorandum for reviewing the manufacturing of 200-250K vehicles, using the Israeli developed platform. REE's electric platform is highly efficient, and its' unique architecture allows for high load capacity compared with other platforms with similar dimensions. "Our cooperation with REE has a disruptive potential for a new generation of vehicles, building on the strengths of the two companies", said Rajesh Jorikor, head of Mahidra's Auto division.

The ministry of transportation approved tax benefits for 3 new safety systems, installed in passenger cars: automatic emergency braking, driver alert detection and a system to prevent children from being forgotten alone in the car. These 3 new systems join a wide variety of active and passive safety systems that entitle new cars for tax benefits in Israel, in an effort to raise the levels of active and passive safety in passenger cars.