The Israeli economy is an advanced economy that belongs to the OECD organization. The GDP per capita is $ 45,188 and the growth rate in 2010-2019 was the average annual growth rate of 3.3% per year. At the beginning of the Corona crisis, the debt-to-GDP ratio was 60% and was one of the lowest in the Western world. The government deficit was 3.7% and the unemployment rate was 3.4%.

The Corona crisis has affected the Israeli economy significantly, as have other economies in the world. The deficit in March 2020 – February 2021 is 12.4% from the GDP.The debt-to-GDP ratio is 73.6% The unemployment rate rose to 4.5% but the unofficial unemployment rate climbed to about 15.5%. Along with the economic crisis in Israel, there is also a political complexity and the declaration of new election in March 2021 that makes it difficult for the government to pass a new budget and formulate a coherent economic policy. On the other hand, from a monetary point of view, the crisis is being managed professionally by the Bank of Israel, which is monitoring the local credit market and solving liquidity problems through plans to purchase bonds and keep interest rates low.

In February, the third lockdown was gradually lifted, and the trend of immunization intensified. By the end of the month over 5 million people (who make up over 50% of the population) were vaccinated. As a result, there was a decrease in morbidity and businesses were reopened and there was a moderate decrease in unemployment. The end of the health crisis will undoubtedly lead to a recovery in the economic situation during 2021. According to the forecasts of the Chief Economist in the ministry of finance, growth in 2021 is expected to reach 4.6%.

Unofficial Unemployment Rate (including non-paid absence due to Covid-19): 15.5% 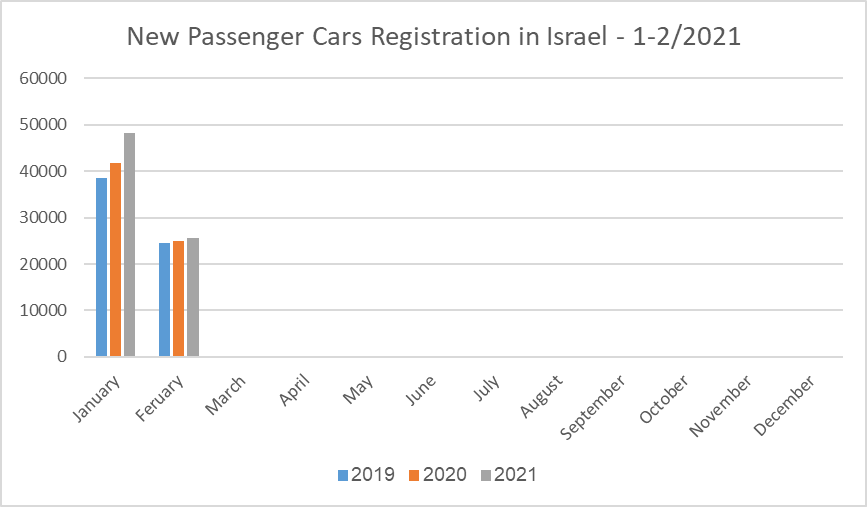 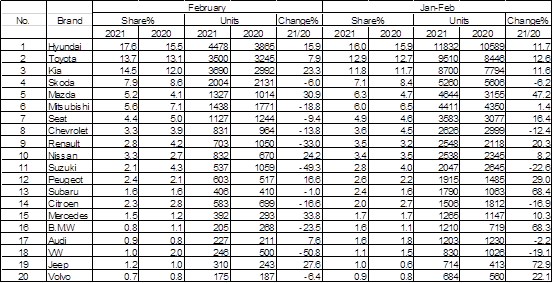 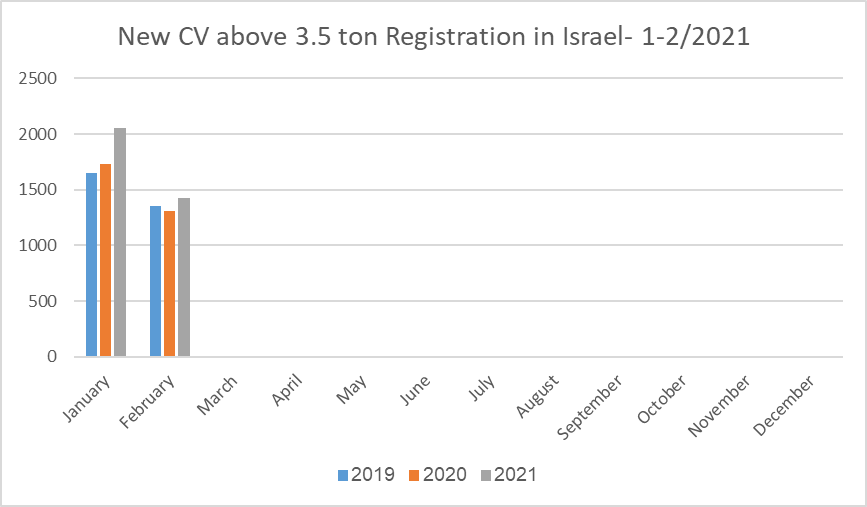 New CV above 3.5 ton Registration According to Brands: January-February 2021

Israeli TransitTech leader Via announced that it had purchased American company Remix, developer of a platform for transportation mapping and planning. The purchase will enable the two companies to combine their abilities in order to create an efficient and accessible transportation system for municipalities and passengers alike. Via's technology, launched originally in 2013, is already operational in 200 cities in 24 countries around the world.

Milgam EV-Edge won the largest tender so far in Israel for EV charging points. The tender calls for the installation and operation of 700 charging points in the city of Petach-Tikva, 50 of which will be installed immediately and the rest gradually in the next few years, according to the rising demand for EVs.

Israeli Chakratec signed a memorandum with American convenience stores and gas stations Arko, according to which Arko will begin a 3 months pilot using Chakratec's system for accumulating energy for EV battery charging. Presuming the pilot is successful, Arko will be able to extend the trial to 15 additional stations and will also have the right to distribute the system in the US until the end of 2030.

Israeli Minister of Transportation: Israel to Play a Leading Global Role in the Development of Autonomous Vehicles

In recent years Israel has enabled the testing of autonomous vehicles with the approval and monitoring of the ministry of transportation. Now, the ministry is advancing legislation that will allow for further autonomous vehicle testing and encourage auto manufacturers and auto-tech companies to establish R&D centers in Israel in this field. According to the minister, this legislation is a vital phase in expanding the possibilities for shared transportation and maintaining and strengthening Israel's global position in this dynamic field.

Israeli leading auto-tech company Mobileye will be part of an innovative project for operating autonomous shuttles in Europe. Mobileye, Transdev ATS and Lohr Group announced a strategic collaboration for developing and implementing autonomous shuttle service. The shuttles will be able to drive up to 16 passengers and drive at speeds up to 50 Kmh. Following trials in Israel and in France, the operation is due to begin in Europe by 2023 and expand to additional continents later on.

Microsoft Israel is forming a development group in the field of autonomous vehicles. The group will spear head the development effort led by Microsoft and VW to develop a platform for cloud based autonomous driving using ADP technology. The new group has already started recruiting developers, team heads and product managers.

City Transformer, developer of the small urban EV CT-1, announced that it had raised 15.5M NIS from private investors. The company plans an IPO in the Tel-Aviv stock exchange according to a value of 600M NIS. CT has developed the CT-1, a small urban electric vehicle that can "shrink" and fit in almost any parking spot. Production is already underway in Germany and the company expects the first serial model to roll off the production line this coming June, and to get European WVTA by October this year.