The Israeli economy is an advanced economy that belongs to the OECD organization. The GDP per capita is $ 44,962 and the growth rate in 2010-2019 was the average annual growth rate of 3.3% per year. At the beginning of the Corona crisis, the debt-to-GDP ratio was 60% and was one of the lowest in the Western world. The government deficit was 3.7% and the unemployment rate was 3.4%.

The Corona crisis has affected the Israeli economy significantly, as have other economies in the world. The deficit in April 2020 – March 2021 is 12.1% from the GDP.The debt-to-GDP ratio is 74.4% The unemployment rate rose to 5.1% but the unofficial unemployment rate climbed to about 12%. Along with the economic crisis in Israel, there is also a political complexity and the indecisive results new election in March 2021 that makes it difficult for the government to pass a new budget and formulate a coherent economic policy. On the other hand, from a monetary point of view, the crisis is being managed professionally by the Bank of Israel, which is monitoring the local credit market and solving liquidity problems through plans to purchase bonds and keep interest rates low.

In March, the third lockdown has ended, and the trend of immunization intensified. By the end of the month, in Israel were vaccinated over 5 million people, who make up over 50% of the population. As a result, there was a decrease in morbidity and businesses were reopened and there was a decrease in unemployment. The end of the health crisis will undoubtedly lead to a recovery in the economic situation during 2021. According to the forecasts of the Chief Economist in the Ministry of Finance, growth in 2021 is expected to reach 4.6%.

Unofficial Unemployment Rate (including non-paid absence due to Covid-19): 12% 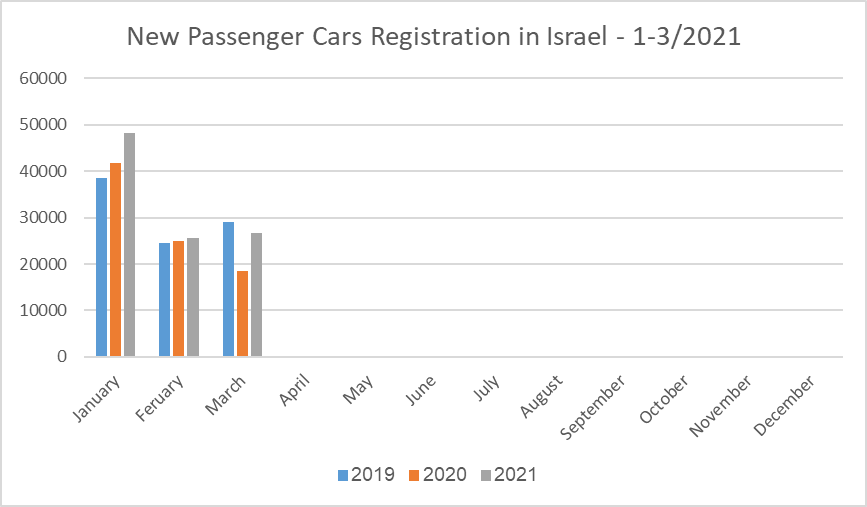 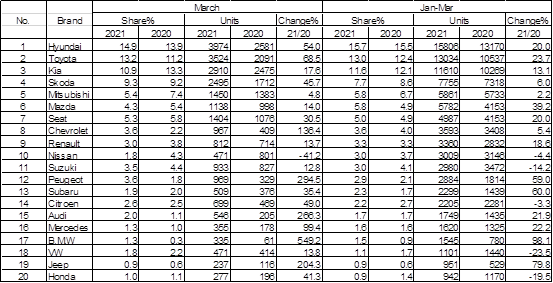 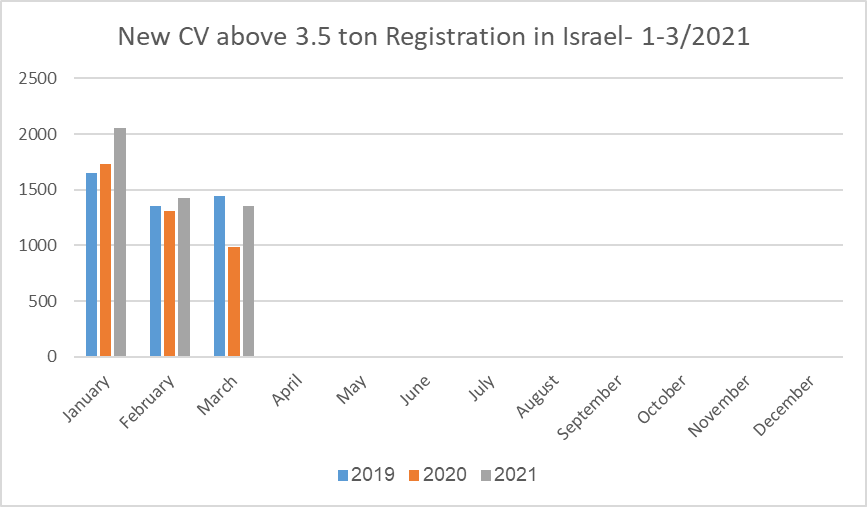 New CV above 3.5 ton Registration According to Brands: January-March 2021

Autotalks, an Israeli auto-tech company developing smart communication solutions using V2X technology, is considering a merger with a SPAC company in order to be traded in Nasdaq. The company is aiming for a valuation of 1.5-2B US$. Autotalks has already won two contracts for implementing communication chips in future VW and Toyota models. The company has raised 120M US$ and employs a hundred employees.

Ford Motor Company will embed Israeli app Mappo in its cars multimedia systems. The app connects to the map of the navigation system and adds cultural information, taken from books, films, songs and historical events, to landmarks on the map. The app will be available for download from Ford's app shop and is compatible with SYNC 3 and SYNC 4 multimedia systems. Mappo was founded in 2016, raised so far 3.5M US$ and employs 20 employees. It currently holds information about 30,000 landmarks, most of which are in large cities in the US.

Talcar, the official importer and distributor of Kia and SsangYong in Israel, invests 3.5M NIS in GoTo, the operator of car2go car sharing service. The investment was made according to a company value of 45M NIS. This is the first time that a car importer invests in the field of car sharing. GoTo also operates Tel-Aviv municipality car sharing service Autotel. The investment echoes Kia's Kia-Flex service and may lead to more Kia cars serving as part of car2go's fleet.

Roland Berger Consulting and EcoMotion community released a report summarizing the state of the Israeli Auto-Tech industry. According to the report, 40% of Auto-Tech start-ups concentrate on cyber security, ADAS, connectivity and autonomous driving, 35% on mobility as service and 15% on electrification and energy. The report states that there are 621 Israeli Auto-Tech start-ups, 419 of them founded in the last 5 years. So far, start-ups developing connectivity and autonomous driving technology has attracted most of the investments – 19.58B US$.

Israeli SerVision launches a new blind spot monitoring safety system. The radar-based system monitors all that happens behind the vehicle and alerts the driver in case there is a danger of collision during over taking. According to SerVision, of the 10 most popular car models sold in Israel, 8 don't have a blind spot monitoring system.

SaverOne, developer of a system for monitoring driver alertness and mobile phone usage during driving, has announced a first collaboration with a truck manufacturer. According to SaverOne, IVECO will test the system for a few weeks as part of a pilot study, and if successful, will consider implementing it in new IVECO trucks. This is the first collaboration between SaverOne and a manufacturer outside of Israel, and the company considers it to be a strategic goal, in addition to marketing the system as an "after-market" product, directly to large fleets.

Israeli start-up Jungo, developer of driver monitoring systems, is getting ready for an IPO in Tel-Aviv. According to The Marker newspaper, the company aims for a valuation of 400-500M NIS. Jungo's product is a AI software that connects to a camera facing the passenger compartment of the car and monitors what happens in it. The action taken once the system identifies that the driver is distracted, can be determined by the car manufacturer. Jungo was founded in 2013 and currently employs 30 employees.