The Israeli economy is an advanced economy that belongs to the OECD organization. The GDP per capita is $ 45,357 and the growth rate in 2010-2019 was the average annual growth rate of 3.3% per year. At the beginning of the Corona crisis, the debt-to-GDP ratio was 60% and was one of the lowest in the Western world. The government deficit was 3.7% and the unemployment rate was 3.4%.

The Corona crisis has affected the Israeli economy significantly, as have other economies in the world. The deficit in May 2020 – April 2021 is 11.2% from the GDP.The debt-to-GDP ratio is 74.9% The unemployment rate rose to 5.3% but the unofficial unemployment rate climbed to about 10.6%. Along with the economic crisis in Israel, there is also a political complexity and the indecisive results new election in March 2021 that makes it difficult for the government to pass a new budget and formulate a coherent economic policy. On the other hand, from a monetary point of view, the crisis is being managed professionally by the Bank of Israel, which is monitoring the local credit market and solving liquidity problems through plans to purchase bonds and keep interest rates low.

In April, the population immunization intensified and the limits of the corona were lifted. As a result, the Israeli economy returned to function and therefore there was a decrease in unemployment. The end of the health crisis will undoubtedly lead to a recovery in the economic situation during 2021. According to the forecasts of the Chief Economist in the ministry of finance, growth in 2021 is expected to reach 4.6%.

Trade in Goods and Services: $44.8 billion

Unofficial Unemployment Rate (including non-paid absence due to Covid-19): 10.6% 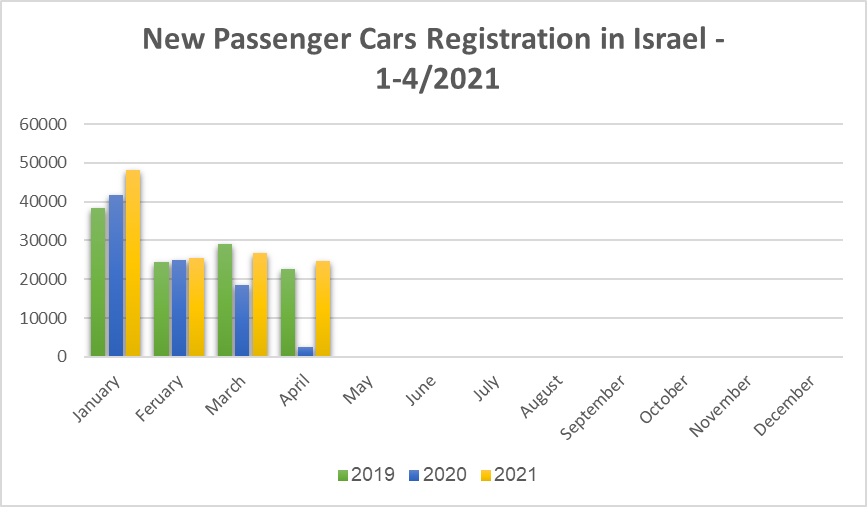 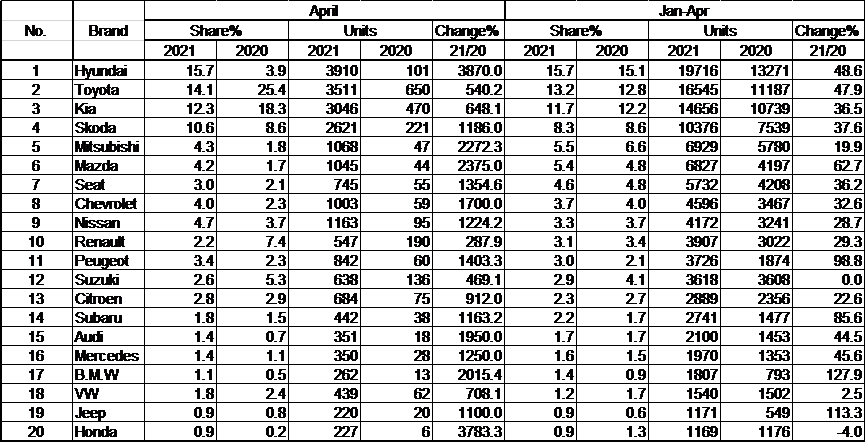 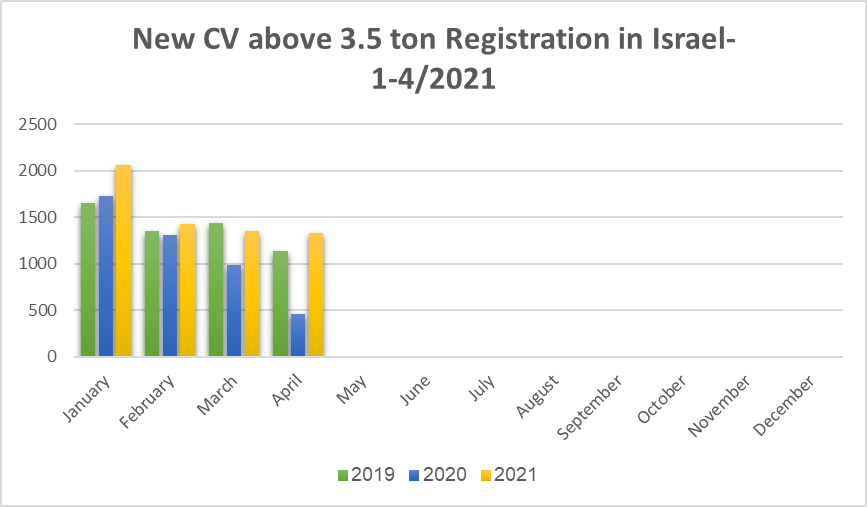 New CV above 3.5 ton Registration According to Brands: January-April 2021

Stellantis (PSA and FCA) and the Israeli Innovation Authority signed a memorandum of understanding, according to which they will collaborate in identifying and developing Israeli companies in the fields of smart mobility, cyber security and AI. The Innovation authority will aid in tracking, funding and matching the companies to Stellantis, which will support R&D, marketing and global operations. The memorandum was signed by Dr. Ami Applebaum, chairman of the innovation authority, and Robert Di-Stephano, in charge of e-mobility at Stellantis.

Israeli GoTo Global, operator of shared-car service CAR2GO, and shared bicycle service Mobike by CAR2GO, announced the launch of a new "Multi-Model" shared mobility solution in Madrid. The service includes 450 cars, 400 electric scooters and additional 450 electric kick-scooters that will be added to the fleet shortly. The users will be able to choose the most suitable mode of transportation for them, using one single App. This model is being operated successfully in Malta for the past two years.

Israel Smart Mobility Living Lab, a NPO dedicated to accelerating innovation, is initiating a data sharing platform for tech companies and municipalities in order to reduce traffic accidents and improving the quality of transportation. Companies and public authorities will collaborate, share anonymous data from road users and infrastructure, and develop models for reducing accidents and congestion, improving infrastructures and decreasing pollution. The new platform enables sharing, integrating and presenting data easily and is based on the "Data Trust" concept developed at MIT.

Dan, one of Israel's largest public transportation companies, will start equipping its' bus fleet in the Tel-Aviv metropolitan area with cyber-security systems. Dan became recently a shareholder in Enigmatos Cyber security, a company that developed security systems that are able to identify and analyses cyber-attacks in real-time. The systems developed by Enigmatos will be installed in fleets in order to prevent hijacking of buses by hackers and hostile elements.

Israel and South Korea are to sign a free trade agreement that will contribute to the volume of trade between the two countries and reduce customs. This agreement will be a first of its kind between Asian and Middle Eastern countries. Following the signing, over 95% of Israeli products exported to South Korea will be customs free, and the 7% customs fee imposed on vehicles imported from South Korea will be canceled.

The Israeli ministry of the environment announced that it will support the purchase of 220 electric buses for public transportation companies in Israel. The ministry will invest 59.2M NIS in the purchase, in addition to 80 electric buses that were already purchased at the cost of 27M NIS. This step is part of the ministry's policy to reduce the use of diesel-powered buses in large metropolitan areas.

Cobra, an Israeli company specializing in security, multimedia and safety automotive systems, launches a new product: the Mobile Key. This product enables all the actions performed by the original car key: opening and locking of doors, starting the engine, opening the trunk and the use of the lights – using an App and thus rendering the car key redundant. The App is based on BLE technology and operates to a distance of up to15 meters. The communication between the car and the App is encrypted in a 256 bit protocol.