The Israeli economy is an advanced economy that belongs to the OECD organization. The GDP per capita is $ 45,958 and the growth rate in 2010-2019 was the average annual growth rate of 3.3% per year. At the beginning of the Corona crisis, the debt-to-GDP ratio was 60% and was one of the lowest in the Western world. The government deficit was 3.7% and the unemployment rate was 3.4%.

The Corona crisis has affected the Israeli economy significantly, as have other economies in the world. The deficit in June 2020 –May 2021 is 10.5% from the GDP.The debt-to-GDP ratio is 74.9% The unemployment rate rose to 5.1% but the unofficial unemployment rate climbed to about 9.8%. Along with the economic crisis in Israel, there is also a political complexity and the indecisive results new election in March 2021 that makes it difficult for the government to pass a new budget and formulate a coherent economic policy. On the other hand, from a monetary point of view, the crisis is being managed professionally by the Bank of Israel, which is monitoring the local credit market and solving liquidity problems through plans to purchase bonds and keep interest rates low.

In April, the population immunization intensified and the limits of the corona were lifted. As a result, the Israeli economy returned to function and therefore there was a decrease in unemployment. The end of the health crisis will undoubtedly lead to a recovery in the economic situation during 2021. According to the forecasts of the Chief Economist in the ministry of finance, growth in 2021 is expected to reach 4.6%.

Unofficial Unemployment Rate (May 2021) (including non-paid absence due to Covid-19): 9.8% of Labour Force 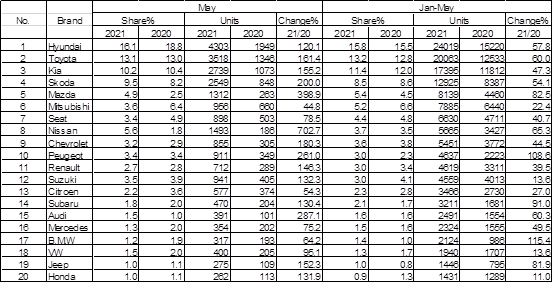 New CV above 3.5 ton Registration According to Brands: January-May 2021

EV-Edge: Agreement for Installing 100 Charging Points and a Pilot for Operating a Fleet of Electric Cars for Nof-Hagalil Municipality

EV-Edge, operator of a network for electric cars charging, announced a new agreement with real-estate company Amot Investments, according to which the company will install 100 public charging points in commercial and employment centers owned by Amot. The charging points will be installed in strategic locations, beginning with ToHa project in Tel-Aviv, Kfar-Saba Mall and additional locations. EV-Edge also won a tender initiated by the Ministry of Energy, for operating a municipal patrol fleet of electric cars in Nof-Hagalil municipality. The project includes operating the electric cars, installing charging points and a technological platform for managing the energy of the fleet.

Renault to Operate a Shared Electric Car Service in Tel-Aviv

Renault intends to operate shared electric car service in Tel-Aviv, so said the head of its mobility division during Ecomotion conference held in TA. The company even presented the proto-type of the vehicle chosen for their task – Renault i-EZ, an electric two-seater with a removable and interchangeable battery, very much like the approach used by Shay Agasi's Better-Place a few years back.

EcoMotion week was held in virtual form on May 18-20 and showcased hundreds of Israeli smart mobility companies and start-ups. The conference included virtual startup and community exhibitions, lectures by leading industry executives and dedicated panels. Besides technology, one of the main issues that was discussed was the "The race for SPAC" – the recent trend of Auto-Tech companies to merge into SPAC instead of aiming for IPO's.

Aquarius: Technological Breakthrough and a Memorandum for Opening a Factory in Dubai

Aquarius engines, developer of a linear hydrogen engine, announced that its engine successfully underwent tests held in collaboration with Austrian AVL. The 10 Kg engine operated on hydrogen fuel only and produced near-zero gas emissions. Aquarius also signed a memorandum of understanding (MOU) with energy company KIP for establishing a joint factory in the United Arab Emirates to manufacture products for the automotive industry based on Aquarius technology. The scope of the investment by KIP will be 1.2-1 Billion US$.

Israeli ADI Car Systems presented "Bcare" – a new system for preventing "Forgotten Baby Syndrome" in cars. The system is composed of a cushion placed on the infant's safety seat and a dedicated App connected via BT. The system was developed at the cost of 300,000 NIS towards the implementation in the beginning of August of a new directive by the ministry of transportation that requires such a system in any vehicle driving infants younger than 4-year-old.

A new and innovative project led by "Netivey Israel" and Israeli Smart Mobility Living Lab will use a technological platform and AI in order to reduce traffic congestions and accidents. The project will use AI based integration of multiple data sources (Waze and "Moovit" users, road cameras footage and drones) in order to recommend traffic management. For the first pilot, a section from road No.2 between Netanya and Glilot interchanges was chosen. in order to gather more information, smart infrastructure will be installed along this section – thermal cameras, Bluetooth detectors and Wi-Fi. Among the companies that will collaborate on this project are "Moovit" , "Nexar, "Waycare", "BWR", "Safer Place", "A.D. Knight", "ADASKY", municipalities and the Ministry of transportation.

Fatal Hotels Chain to Deploy Charging Points at its Hotels

Fatal Hotels Chain, one of the largest hotel chains in Israel, announced that it will deploy charging points for electric cars in its hotels. Currently the chain has 26 points in 16 hotels, the amount will grow into 47 double charging points in 26 hotels and by the end of the year DC fast charging points will also be added.

Herzliya municipality announced a new pilot for smart analytics and traffic data monitoring. The municipality will start monitoring the number of vehicles in main intersections and feed the information into a deep-learning technological system developed by "Magalcom". The system will analyze the data, alert if it detects anomalies and produce reports that will be used for improving traffic flow. The municipality also announced that all new buildings with a parking lot built in Herzliya will require charging points for electric cars.

"SaverOne", developer of a system for monitoring driver behavior, announced new pilot agreements with 5 new companies. These join dozens of similar collaborations in which "SaverOne" system is installed in large commercial fleets. The company recently announced that it started a collaboration with IVECO in order for the Italian truck manufacturer to install the system in its trucks.