The Israeli economy is an advanced economy that belongs to the OECD organization. The GDP per capita is $ 41,884 and the growth rate in 2010-2019 was the average annual growth rate of 3.3% per year. At the beginning of the Corona crisis, the debt-to-GDP ratio was 60% and was one of the lowest in the Western world. The government deficit was 3.7% and the unemployment rate was 3.4%.

The Corona crisis has affected the Israeli economy significantly, as have other economies in the world. The deficit in 2020 is expected to reach 14% from the GDP and the debt-to-GDP ratio will grow to 76% by the end of 2020 and 78% by the end of 2021. The unemployment rate rose to 5% but the unofficial unemployment rate climbed to about 19% with the second lockdown in September. Along with the economic crisis in Israel, there is also a political complexity that makes it difficult for the government to pass a budget and formulate a coherent economic policy. On the other hand, from a monetary point of view, the crisis is being managed professionally by the Bank of Israel, which is monitoring the local credit market and solving liquidity problems through plans to purchase bonds and keep interest rates low.

At this point, Israel is coming out of the second lockdown and economic indicators show a slow return to routine. Purchases of products and services in Israel that decreased during the second lockdown phase are gradually rising to their level before it begins, and there are reports of an increase in the purchase of apartments and cars. The rating agency S&P has at this stage left Israel's credit rating at the same level, and does not anticipate significant problems at this stage, certainly not in an international comparison. The local currency also maintains its stability relative to the Dollar and Euro reference currencies and there are no sharp movements. The domestic capital market has also been stable in the recent months.

Unofficial Unemployment Rate (including non-paid absence due to Corona) (September 2020): 19% 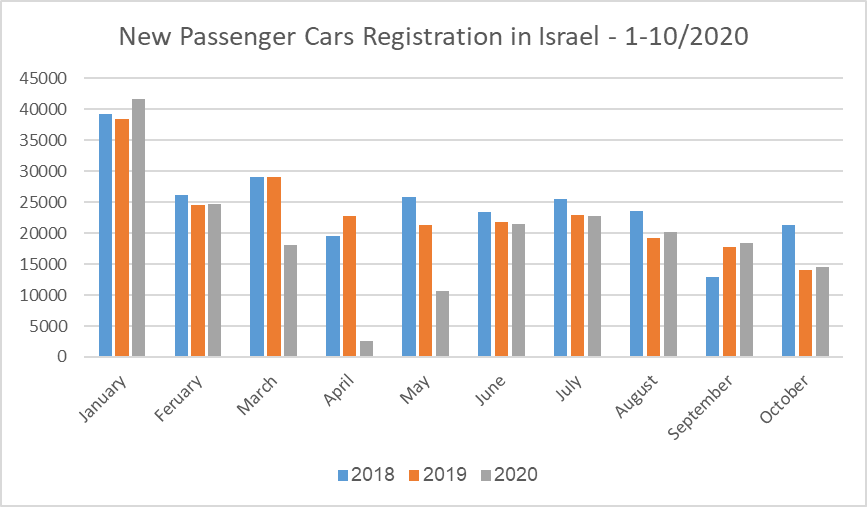 New Passenger Cars Registration in Israel According to Brands 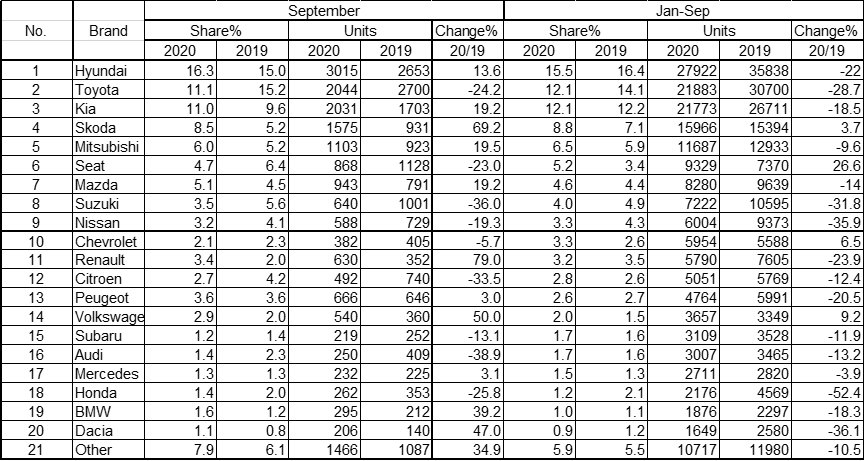 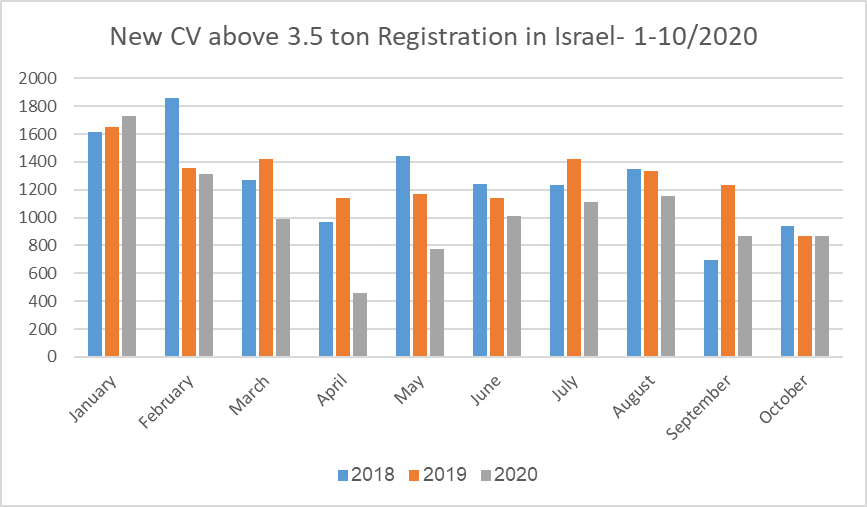 New CV above 3.5 ton Registration in Israel According to Brands

New Bus Registration in Israel According to Brands

Two sessions of the Knesset Audit Committee were dedicated recently to discussing the promotion of renewable energies and electric vehicles. The committee discussed tax benefits and pricing of electric vehicles, and some decisions were forwarded to the taxing committee. The CEO of the I-via (Israeli Vehicle Importers Association(, Hezi Shayb, participated in the discussions and commented on the policy and the promotion of electric vehicles. Shayb reminded the committee members that less than 1,500 EVs were sold in Israel this year – less than 1% of the total new cars. The reasons for that, maintained Shayb, is that the government doesn't support the purchase, in contrast to OECD countries in which consumers receive benefits worth tens of thousands of Euros when purchasing electric cars. Shayb also mentioned that contrary to the belief that electric cars receive reduced purchasing tax of 10%, the tax in fact is 17% since an additional 7% is applied to the battery. He concluded by calling government officials to give personal example and drive EVs.

Arbe, an Israeli company, which is a leader in the development of Radar technology, is launching its new development platform for Radar systems to be used in ADAS and Autonomous vehicles. The platform includes the first Radar processing chip compatible with AEC-Q100 standard, supporting 2K resolution and over 100,000 identifications per frame. According to Arbe, more than 20 leading auto manufacturers and Tier-1 companies already purchased the platform, in order to use it as a base for their next generations Radar systems. The company added that their platform will comply with the new NCAP standards, due to take effect in 2022.

Israeli Adasky's Round B raises 15M$

Israeli start-up Adasky raised 15M$ in round B, following 55M$ already raised in earlier rounds from Japanese corporation Kyocera and South-Korean auto parts manufacturer Sungwoo Hitech, among others. The company develops heat sensing systems for the car industry, using LWIR technology, and its leading product is the "Viper" sensor, designed to be used in ADAS systems and autonomous vehicles.

Soon: Autonomous Vehicle Use in Israel Will No Longer Be Defined as "Experimental"

According to Calcalist daily newspaper, the Israeli ministry of transportation intends to re-define the use of autonomous vehicles on Israeli roads, reduce the number of relevant rules and regulations, and thus hasten the use of this innovative technology. Re-defining autonomous driving as similar to normal driving will enable the cancelation of many restrictions, and will give Israel a competitive advantage in the field of autonomous driving.

Tomcar Negotiating a Plant in Dubai

Israeli All-Terrain vehicle manufacturer Tomcar is negotiating the establishment of a production factory in the United Emirates. The new plant will be a joint venture between the Israeli company, and two American companies – Comprime Solutions and Prince Manufacturing, both owned by American businessman Eric Prince. Tomcar recently signed a contract to supply ATV to the American Marine Corps, and production of the vehicles is due to begin soon in the USA and Mexico.

Israeli company Innoviz, developer of Lidar sensors, announced its new generation product InnovizTwo. The company stated that the new sensor is 70% cheaper compared with the previous generation, and provides substantially upgraded performance. According to Innoviz, the sensor is highly suitable for autonomous vehicles level 2+, and in the future the upgrade to level 3 will be done using software update, with no additional hardware.

Israeli company VisIC, a leader in the use of GaN technology for electric vehicles, completed a series E round with the participation of semi-conductor giant MediaTek. The money raised in this round will enable VisIC to expand its offerings in the growing market for electric vehicles. New products will be developed based on VisIC's D3GaN technology and its' innovative GaN transistor.