The Israeli economy is an advanced economy that belongs to the OECD organization. The GDP per capita is $ 44,566 and the growth rate in 2010-2019 was the average annual growth rate of 3.3% per year. At the beginning of the Corona crisis, the debt-to-GDP ratio was 60% and was one of the lowest in the Western world. The government deficit was 3.7% and the unemployment rate was 3.4%.

The Corona crisis has affected the Israeli economy significantly, as have other economies in the world. The deficit in 2020 is 11.1% from the GDP and expected to grow up to 12% by the end of the year. The debt-to-GDP ratio is 71.7% will grow by the end of 2021 up to 78%. The unemployment rate rose to 4.7% but the unofficial unemployment rate climbed to about 14.7%. Along with the economic crisis in Israel, there is also a political complexity that makes it difficult for the government to pass a budget and formulate a coherent economic policy. On the other hand, from a monetary point of view, the crisis is being managed professionally by the Bank of Israel, which is monitoring the local credit market and solving liquidity problems through plans to purchase bonds and keep interest rates low.

The second lockdown introduced in Israel since mid-September has preceded many developed countries that have entered the lockdown or significantly increased the restrictions in recent weeks. Similar to the first lockdown, the recovery from the second lockdown in Israel appears to be rapid in a variety of economic indicators, such as purchases with credit cards and fuel consumption. However, the harm to employment continues to be significant, especially in industries that are still subject to health restrictions. Global forecasts have been updated upwards for 2020 but they anticipate a slower recovery in 2021, in light of the estimate that it will take several months for the vaccines to be distributed to an extent that will avoid restrictions on economic activity.

Unofficial Unemployment Rate (including non-paid absence due to Corona): 14.6%

New Passenger Cars Registration in Israel According to Brands 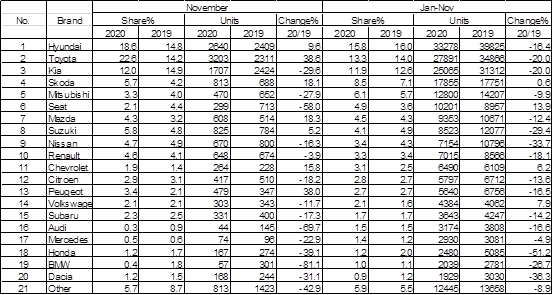 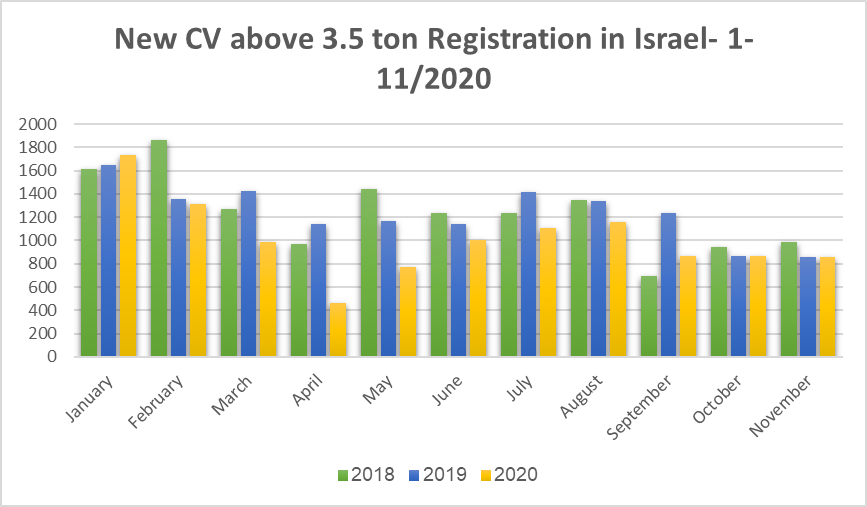 New CV above 3.5 ton Registration in Israel According to Brands 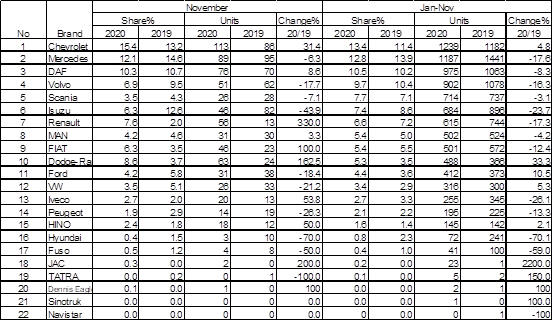 New Bus Registration in Israel According to Brands

Netivey Israel, a governmental company in charge of 8,500 Km of roads, issues a RFI concerning the installment of 130 fast-charging stations for electric cars along Israeli roads. The charging stations the company intends to install will be equipped with fast-chargers that are able to charge 80% of the car's battery within half an hour, or a quarter of the full capacity within 10 minutes. Most of the stations are intended for central and northern Israel, but the plan also includes Road 90 that reaches Eilat in the far south. The company aims to install the first stations, in inter-urban roads first, starting a year from now.

The innovative company Aquarius Engines, developing linear internal combustion engines, published a draft for a public prospectus on its way to a first IPO. The company already secured $65M according to an estimated value of $260M, but could raise additional funds during the public phase. Aquarius currently employs 40 workers, most of them in R&D, and among its investors is the Japanese automotive company Musashi Seimitsu.

Israeli start-up WATT, developed an innovative two-seater electric urban vehicle, combining the advantages of a motorcycle, Segway and automobile. The WATT vehicle consists of a round capsule with two small wheels, each of them equipped with an electric motor. It weighs 450 Kg and can reach a top speed of 120 Kmh. The urban vehicle is in prototype stage, but already registered as a patent.

Japanese Automotive giant DENSO chose Israeli Foretellix to supply smart automation solutions for its ADAS systems. The platform developed by Foretellix allows for cost reduction, and also reduces the number of recalls, diagnostics costs and TTM (Time to Market (. The collaboration follows a successful pilot phase that was carried out with DENSO Germany earlier this year.

According to Globes daily newspaper, Israeli auto-tech Mobileye will collaborate with Chinese electric cars brand NIO in developing a driverless taxi. The project started in 2018 as a joint venture between Mobileye and the VW group, but since the VW electric car platform hasn't arrived in Israel yet, Mobileye signed a strategic cooperation agreement with NIO and two electric cars made by NIO are already employed in trials by Mobileye. Globes newspaper reports that the agreement with VW is still valid and that VW electric cars will join the development process in the future.

"Made in Israel" Buses Destined for Dubai

Israeli Weiss Group, holder of the franchise for distributing HIGER buses in Israel, Bulgaria and Serbia, is negotiating a pilot for operating an electric bus in Dubai with the road and transportation authority of the United Emirates. HIGER offers electric buses equipped with ultra-capacitors and suited for the extreme weather conditions of the UA. Following the pilot stage, the UA that supports the shift to zero emissions public transportation, may purchase large amounts of buses from the Weiss Group. These buses will most likely be assembled in Israel, where local company Merkavim has already developed an electric bus based on HIGER components for the local market.

The Israeli ministry of transportation operates a pilot test aimed at enhancing the safety of bicycle riders, especially around buses. Four public buses were equipped with a smart blind-spot monitoring system, and the bus drivers will monitor its performance and report it to the ministry in order to assess its effectiveness. Bicycle riders are at risk of accidents, especially during winter, and according to the latest report by the Israeli central Bureau of Statistics, there has been an increase of 26.2% in bicycle riders that died and 26.8% in bicycle riders severely injured in road accidents in recent months.