The Israeli economy is an advanced economy that belongs to the OECD organization. The GDP per capita is $ 45,945 and the growth rate in 2010-2019 was the average annual growth rate of 3.3% per year. At the beginning of the Corona crisis, the debt-to-GDP ratio was 60% and was one of the lowest in the Western world. The government deficit was 3.7% and the unemployment rate was 3.4%.

The Corona crisis has affected the Israeli economy significantly, as have other economies in the world. The deficit in February 2020 – January 2021 is 12.1% from the GDP.The debt-to-GDP ratio is 73% The unemployment rate rose to 4.8% but the unofficial unemployment rate climbed to about 16.7%. Along with the economic crisis in Israel, there is also a political complexity and the declaration of new election in March 2021 that makes it difficult for the government to pass a new budget and formulate a coherent economic policy. On the other hand, from a monetary point of view, the crisis is being managed professionally by the Bank of Israel, which is monitoring the local credit market and solving liquidity problems through plans to purchase bonds and keep interest rates low.

In January, a third lockdown was imposed in Israel, which slowed economic activity and added many to the circle of unemployment. On the other hand, since the end of December, an extensive vaccination campaign began, in which more than 3.5 million people of Israel's population was vaccinated. If the trend of a high immunization rate continues, Israel will be able to vaccinate the majority of the population as early as March and April. The end of the health crisis will undoubtedly lead to a recovery in the economic situation during 2021. According to the forecasts of the Chief Economist in the ministry of finance, growth in 2021 is expected to reach 4.6%.

Unofficial Unemployment Rate (including non-paid absence due to Corona): 16.7%

In January 2021, the Israeli passenger car market registered an all-time record with 48,242 registrations. This figure represents an increase of 15.7% compared to January 2020. 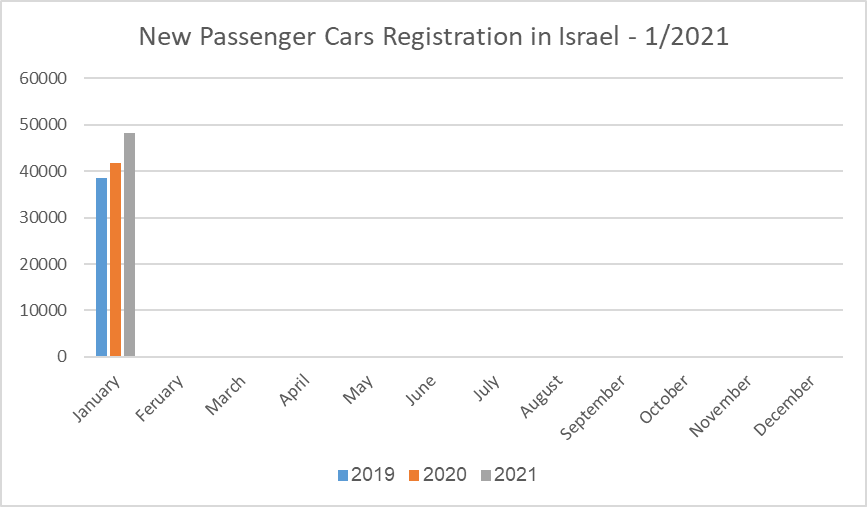 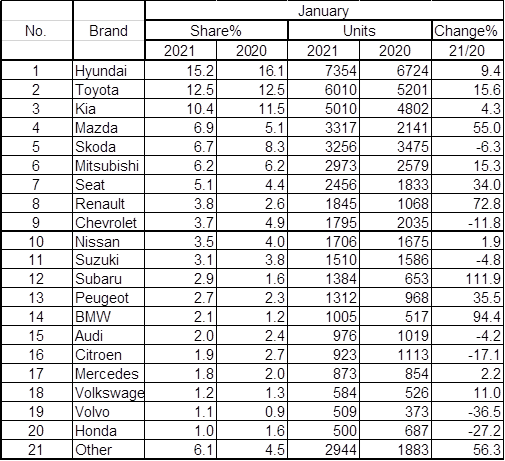 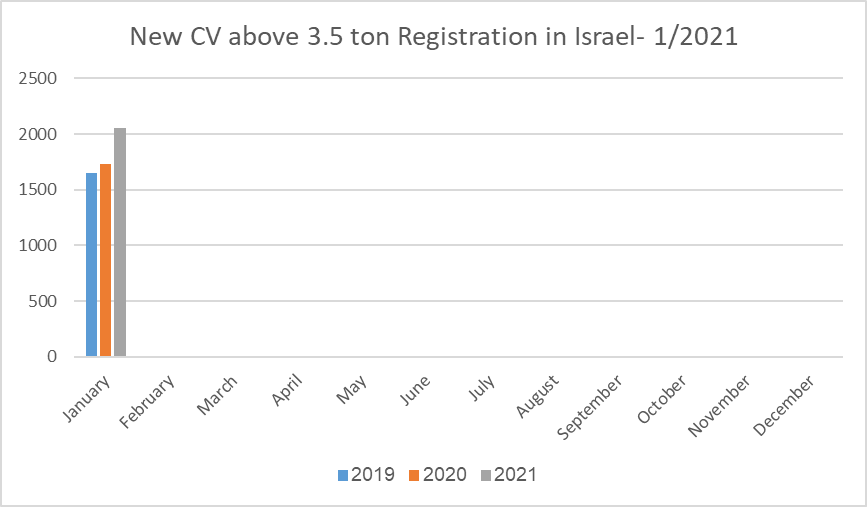 New Bus Registration in Israel 1-12/2020 According to Brands 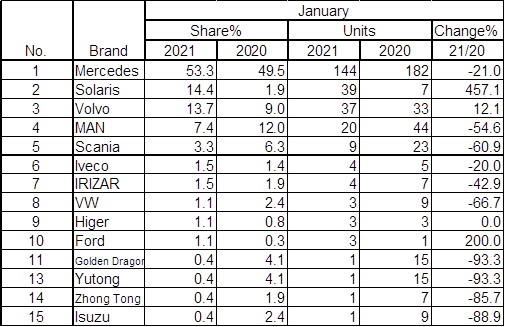 Hyundai to Invest in UVeye

Following Honda, Toyota and Volvo, Hyundai will also invest in Israeli UVeye, bringing the investment of auto manufacturers in the company to 40M$. UVeye developed a system composed of dozens of cameras and sensors that creates a 3D 360 degrees picture of a car, and by using AI detects scratches or damages. The system scans the whole car from all sides, including below it, and is useful in production lines and trade centers. UVeye was founded in 2016 and currently employs 100 employees.

REE - the Israeli start-up that developed a unique drive system and chassis for electric vehicles, enters Wall-Street via a merger with 10X Capital SPAC. REE was founded in 2013 and since then raised 160M$. At the end of 2019, the company announced a collaboration with HINO Motors that will use REEs platform to develop light trucks.

Electric car manufacturer Tesla enters the Israeli market. The company opted for a "quiet launch" with hardly no PR, and operates only online at this stage. Tesla cars can be ordered online only through the company's website – the basic model 3 is priced below 200,000NIS, and prices go up to 740,000NIS for a Model S Plaid +.

Israeli start-up Otonomo will merge with Software Acquisition Group INC II and will be traded in NASDAQ beginning in Q2 2021. Otonomo developed a platform for secured trading in data collected from connected vehicles. According to the company, during 2020, 90% of cars produced included a SIM card. These cars constantly produce data that can be sold to interested parties such as insurance companies or smart cities, and Otonomo shares the profits with the Auto manufacturers. The company was founded in 2015 and employs 70 employees. It has raised so far 362M$, including the latest merger.

Israeli Ministry of Environmental Protection: Only ZE Buses by 2025

The Israeli ministry of environmental protection published a road-map, stating that by 2025 only ZE buses. i.e. electric buses, will be allowed in urban areas. The ministry claims that the economic benefit of this shift will reach 1.35B NIS by 2034. Currently, the number of electric buses in Israel is negligible, and in order for the road-map to materialize it needs to be legislated.

Field Trial for a Hydrogen Powered Trucks in Israel

Hyundai will start field trials for a Hydrogen powered heavy truck in Israel this coming summer. The Truck, with a GVW of 18 tons, has a range of 1,000 Km and uses a fuel-cell engine that transforms Hydrogen into electric energy. The trial will be carried out in collaboration with local company Colmobil – the official importer of Hyundai to Israel. According to Calcalist business daily, a second hydrogen truck will be operated by energy company Sonol, that will build a Hydrogen filling station in Haifa with the aid of German company H2 Mobility.

City Transformer, an Israeli start-up that developed a "folding" urban vehicle, heads for an IPO. The CT 1 is a small urban vehicle that measures 2.49X1.4 meters and has space for a driver and an additional passenger (or two children). It is electric powered with a range of 120-180 Km, and has a special mechanism that allows it to fold to a width of only 1 Meter and fit in almost any parking space. The company intends to go public during the Q1 2021, it was founded in 2014 and has yet to reach series production.

Saverone, developer of a safety system that prevents driver distractions caused by the use of cellular phones, enters the public transportation segment for the first time. The company will install its system in 30 public buses operated by Kavim, one of the largest PT companies in Israel with a fleet of 1,500 buses. The collaboration will begin as a pilot, and Saverone will use the knowledge and information gathered in order to fully develop its system for PT buses for commercial use.